History, Mission, and Spirit of Mercy

Faced with poverty and the subjugation of women in Ireland in the 1800's, Catherine McAuley, foundress of the Sisters of Mercy, envisioned the education of women as a means to spread Christian values and affect social change.

Her life and works were a testament to this belief. She saw education as the primary tool to help women find and achieve their full human potential. This philosophy is the foundation of the many schools and educational programs sponsored by the Sisters of Mercy.

The Academy first opened its doors in Assumption Parish and later moved to a private residence at Broad Street and Columbia Avenue. By August 1863, there were 28 students. Over the years the Academy experienced many changes and eventually moved to the Taylor Estate in Gwynedd Valley, where the Sisters converted stables into classrooms and erected a science building to serve the Academy and College from 1947 to 1955. In April 1955, construction of the elementary and secondary schools was completed and the Academy of Mercy of the Sisters of Mercy became Gwynedd Mercy Academy High School.

Over the years, Gwynedd Mercy Academy High School has evolved its programs in response to changing needs. In the early 1990’s there was much development in Montgomery County and a growing interest in private education. An analysis in 1995 indicated a need for more classrooms, especially for Art and Music and for a Performing Arts Center. The first phase of construction was completed in August 1999. A new library, Art and Music rooms, music practice rooms, a writing lab and a tiered lecture hall, as well as new tennis courts and a track were completed in this first phase.

Enrollment increases and student talents highlighted the continued need for a Performing Arts Center. The Renaissance Campaign was organized to finance the second phase which was completed in March 2004. This area encompasses the main entrance and lobby, a chapel to accommodate 50 persons, and an auditorium which seats 525. Also included in that phase were storage areas, a dressing room and a TV studio. 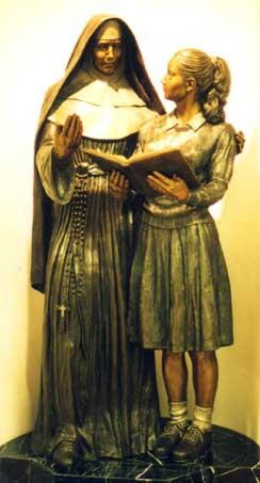 In 1861, it was this same mission and dedication to women that compelled the sisters to establish the Academy of the Sisters of Mercy in Philadelphia.